ANNOUCEMENT – THE ORIGINAL LINE UP TOUR

Are you sitting down? We have some VERY exciting news.
Sara, Keren AND Siobhan will tomorrow announce that they are embarking on a one time only Bananarama tour together this November!
Yes, it is true! Ms Fahey is back!

Sara says: “Over the years lots of fans have asked for a one off reunion tour with Siobhan – well that time has come and we couldn’t be more excited!”

Over to Keren: “Sara and I went to Siobhan’s house for a barbeque two summers ago and we all started discussing the idea then. The evening ended with a disco in her kitchen and now, in true Bananarama style, we’re bringing that disco to the stage!”

Siobhan: “Being in Bananarama is part of me, part of my history. I never thought this would happen again, but now the day has arrived it feels pretty magical!”

Tickets will be available TOMORROW - Monday 24 April at 9am via a fan pre-sale. Here's the link: http://www.axs.com/uk/series/4244/bananarama-fan-club-presale-tickets?skin=aegliveuk

General on sale for the tour is Wednesday 26 April at 9am. You can check out the WOW VIP packages too – which include your chance to come backstage to meet Sara, Keren and Siobhan. Here’s the link: http://www.axs.com/uk/series/4246/bananarama-2017-uk-tour-tickets?skin=aegliveuk

And as if that wasn’t enough, keep your eyes peeled for all three girls as they embark on a two week stint of promotion across the UK. Tomorrow morning – Monday 24 April – they will be special guests on the Chris Evans Radio 2 Breakfast Show and at 7:15pm on BBC Radio 4 Front Row. 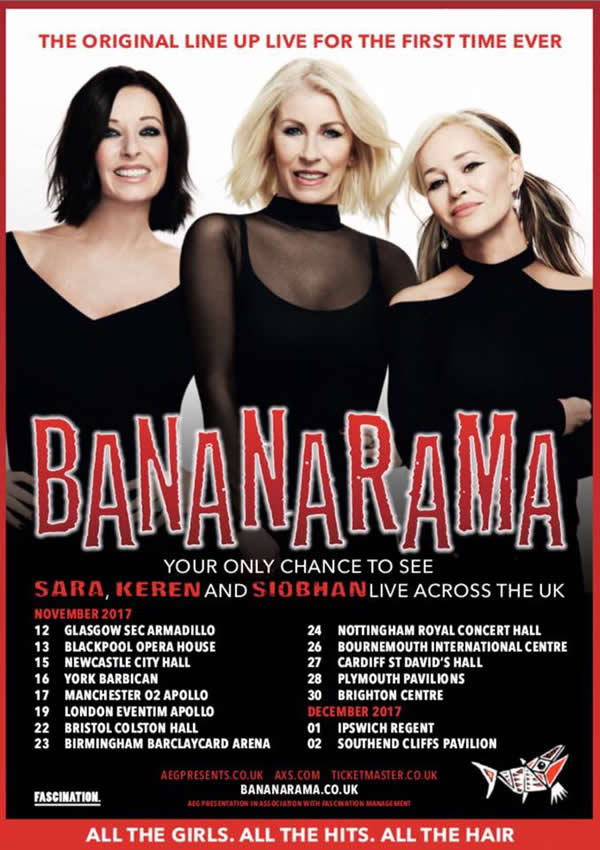